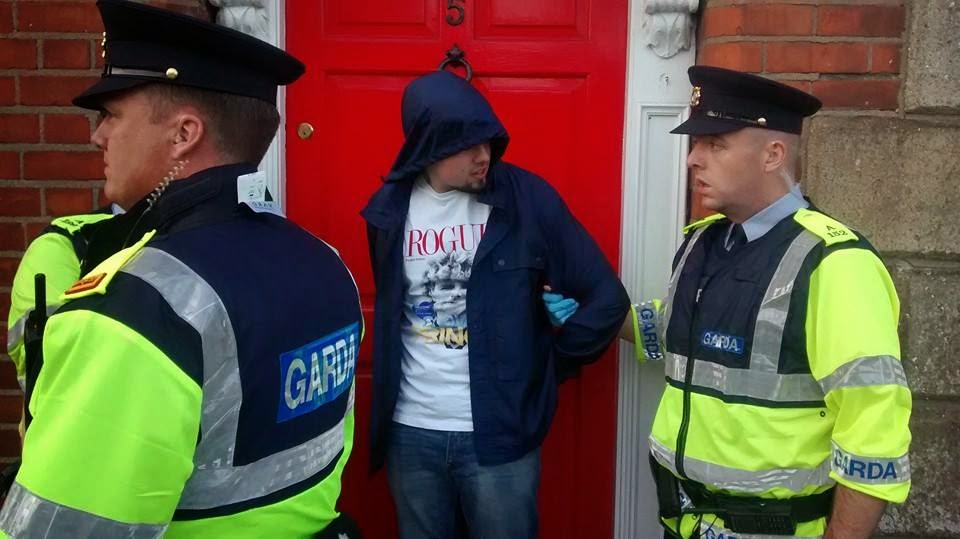 On Friday night last, a young man on his way into a football match in Dublin was arrested, thrown to the ground, and handcuffed.

His offence? Trying to bring a Palestinian flag into a football ground.

Yep, carrying a flag. He had not even entered the ground, to see St Patrick’s Athletic take on Bohemians, when the Garda approached and man-handled him outside the entrance gates.

Video footage taken by his friends at the scene showed that the man had not been drunk, abusive, or resisting arrest. It now seems that flying the flag of an oppressed land, living under colonisation, has become some sort of crime in Ireland in 2014.

Last month, Dundalk FC – a tiny club with limited resources by European standards – were fined €18,000 by UEFA (the sport’s governing body in Europe) because one of their fans dared to fly a Palestinian flag at a football ground.

That punishment seemed all the more shocking when it was confirmed that Atletico Madrid, far richer than Dundalk, were fined €15,000 for racist chanting by their fans back in May.

To UEFA, it seems, flying the flag of a colonised people, living under Apartheid, is now a worse offence than racist chanting.

UEFA had no qualms about supporting racism themselves when they staged the European U-21 championships in Israel last year. They never bothered to ask the Israelis why members of the Palestinian national team are routinely harassed and prevented from travelling to games.

Rightly or wrongly, people in Ireland feel an affinity with Palestinians. Colonised ourselves for hundreds of years, we know what it means to be run out of our homes or denied a State of our own.

During the recent 50 day onslaught against the people of Gaza, more than 2,100 Palestinians were murdered, most of them civilians. Among them were 26 Palestinian sportsmen and sportswomen, according to Amri Hannoun, the Palestinian Football Association's press officer.

During those 50 days, Palestinian flags were prominent at demonstrations throughout Ireland.

The game in Dublin on Friday night was an ordinary, Irish FAI Cup tie between two Dublin clubs. There were, presumably, no UEFA officials in attendance so it was an Irish person, somewhere, who ordered or encouraged the Garda to intervene and arrest the fan.

If it’s illegal to fly a particular flag at a League of Ireland ground now, perhaps us football fans deserve to be told. And told why.

The incident at Richmond Park got me to thinking of what a sick society this former colony has become if, given our own troubled history, someone cannot express solidarity with people living under siege at a football game.

It’s not as though the flag would have incited fans of the opposing side.

And who or what’s next? Will Mayo fans be fined for flying Basque flags? After all, Basque flags are “political” because their independence is not recognised by Spain? Will Cork fans get arrested for flying the Southern Cross flag from the American civil war? Surely they are “political” even if fans of the Rebels choose them as much for their red and white colours as what they represent.

Or is it only people who dare to fly the flag of Palestine who get arrested while walking, peacefully, into Irish sports stadiums? We deserve to be told.

We need to know, because from the video footage I have seen the arrest of this young man was a serious breach of his civil liberties.

As his friends pointed out, he had not been abusive or done anything wrong. His friends told the Ireland Palestine Solidarity Campaign that he’s one of the nicest, quietest guys anyone could imagine and he had not provoked the Gardai in any way.


His bizarre arrest got me to thinking, too, that in less than two years this former colony will put on a major year of celebrations to honour the men who gave up their lives in the fight for Irish freedom back in 1916.


A century on, this “free, independent” Republic – which once supposedly inspired other nations seeking self-determination – has become a gross caricature of itself.


The men wearing the Garda uniforms in Inchicore on Friday night insulted the memory of the generations of Irish people who gave up their lives in the fight for freedom down through the centuries.


Meanwhile, how many of them have ever arrested a corrupt banker or a dodgy developer? It’s far easier to arrest a young football fan than chase after the “real” criminals who brought this country to its knees.


The entire episode is worrying, given the clear implications it has for civil liberties in Ireland if a peaceful, sober football fan is not allowed wave the flag of a people who have been brutalised, occupied and colonised.


It’s yet another small incident from the "Banana Republic” which shows how far modern Ireland has drifted away from the ideals of those who fought to break free from an empire.


The men of 1916 would be disgusted. The Gardai on duty in Inchicore should give a proper explanation – or hang their heads in shame.