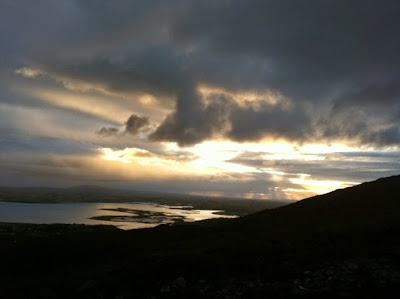 Even if you are not a “spiritual” person, there seems to be something really transformative about the pilgrimage to climb Croagh Patrick as I discovered when I made it to the summit of Ireland’s holiest mountain for the third time in my life last week.

To say the least, the circumstances were different from my previous two climbs. This was a madcap idea, conjured up in a nightclub at midnight, and it involved setting off from the car park at Louisburgh in the dead of night. Probably not to be recommended to everyone!

It just so happened that I met two old friends at a concert in aid of the children of Gaza at Monroe’s Live in Galway. A group of artists had come together to organise this fantastic gig just two weeks earlier, as the Palestinian enclave was being bombarded on a daily basis by Israel.

They wanted to do something, to make a small gesture of support for the children in the Al-Shifa Hospital in Gaza.

It was a wonderful, emotional night. As the music came to an end, we got talking about the old days, and absent friends. My friend Ian had packed a bag with a torch, Tibetan bowls, and winter clothing before making his way to the gig.

He told me that he was about to climb Croagh Patrick for the first time in his life. His aim was to complete the two hour drive by about 3am and get to the top to see the dawn.

Before I knew what I was saying, I blurted out that I would like to go with him. I had no work the next day and thought it would be fun, as I had seen very little of Ian in recent times. Then our friend, Rachel, told us she’d like to join us too. She saw the climb as some sort of Celtic gesture of solidarity with the children of Gaza, who had been in our thoughts all night.

Had I thought about it for too long, I’m sure I would have reconsidered, as I had found the climb tough enough on my two previous expeditions . . . and those climbs were planned for about 11am on Saturday mornings, after a full night’s sleep!

It would have been far easier, and more sensible, to go home after the gig. But we collected torches, clothing, and water from our homes, hit the road, and made it to the foot of the reek at 3.15am.

The Garda at the checkpoint outside Ballinrobe was more than a bit bemused by our plans. As he looked through Ian’s van, he could not believe that three people in their 40s were determined to climb the reek at that ungodly hour.

Of course he was right and sensible. It's probably not the wisest thing in the world to climb Croagh Patrick in the dark after three or four beers at a gig.

But spontaneity and a sense of adventure were things I shared with Ian and Rachel during our wild younger years and all three of us felt drawn to the mountain in the early hours of a Friday morning.

I tried not to think too much about how crazy our plan was as I set off, stick in hand, shining my torch in the dark. And, yes, half way up the mountain I began to think all three of us were insane. Fear took over for a while.

But I can only describe it as a mystical, magical, and spiritual experience to see the dawn break over Clew Bay in the company of two of my oldest friends. The spirit of our ancestors, and of friends who left us too young, seemed to be with us as we made our way slowly up the misty mountain.

We remembered how a mad late night adventure was such a normal part of our younger lives. It was magic to look back down the mountain, at the street lights of Westport or the islands in the bay, as we made our way up the reek in the pitch dark.

We sat on loose stones as the sun rose and talked about the hopes, dreams, and experiences of life which seemed as vivid now in our mid-40s as when we used to talk about the future with the idealism of youth.

On the way back down, I met a Galway man, climbing alone, who had battled liver cancer and was just grateful to be alive. Determined to reach the top, alone, he had left his house at 4am.

He was just so glad to be alive. It seemed the most natural thing in the world to be standing on a deserted mountain, talking about life and love, before 7am.

And so we made our way back to Galway, just in time to catch the morning commuters rushing to work at 9am. Feeling strangely satisfied that we had regained the “natural wildness” which people sometimes forget or lose as they journey through life.