Why do the Irish not talk about 'The Famine'? 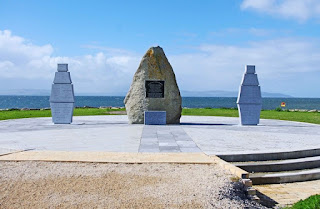 Why, until now, has there been so little evidence of the Great Hunger of 1845 to 1849 on and around the streets, parks, and monuments of Ireland?

A former Hollywood scriptwriter, the people of a Cork village, and a Dublin taxi-driver were not the only ones to be struck by it.

But they decided to do something about it in recent years.

Sometimes you need to go away or talk to strangers to see your home place with clearer eyes or question why some things are somehow best forgotten or ignored.

After many years spent in Britain and the United States, it shocked Mark Kennedy upon his return to his native Galway that there was no public memorial to the greatest disaster in Irish history.

There was no place or statue in his city to commemorate the catastrophe that stole a million lives and forced up to two million to seek out new lives in North America. And Mark wanted to know why.

There was nothing to show friends from the U.S. when they visited the West of Ireland to explore their roots and understand why their ancestors took such arduous journeys.

Mark became a thorn in the side of the establishment in his city and faced many barriers, even much opposition, before opening the Celia Griffin Park near the old fishing village of the Claddagh in 2012.

Many business people didn’t want to know. He was opening up painful wounds from a time when a hundred ‘coffin ships’ set sail from Galway to the east coast of America, between 1847 and 1850.

Many of the passengers, fleeing starvation and deprivation, never made it to the other side. Those who did faced discrimination, hostility, and even deportation back to Europe after they arrived into the ports of Massachusetts and New York.

There was strong antagonism towards the desperately poor immigrants from Ireland – no doubt considered a “s—thole” by the nativists of New York at the time.

Mark, who passed away in October 2016, decided to name the park in memory of a little six year old Galway girl who has now become a symbol for the most terrible time in the history of the West of Ireland.

In Cork, the people of Midleton took it upon themselves to remember the same catastrophe. They commissioned a sculptor, Alex Pentek, to commission a beautiful sculpture of nine eagle feathers in a park in the town.

Despite the oppression they faced themselves, the Choctaw Indians raised money to send to the starving Irish at the height of their suffering in Black 1847. It was the equivalent of tens of thousands of dollars today, but was only marked publicly by the Irish in October 2015.

In Dublin, veteran taxi-driver Michael Blanch also noticed it. This terrible catastrophe seemed to have been erased from the Irish psyche.

Every now and then, a foreign tourist would sit into his cab and ask him if there was any memorial to the Great Famine in Dublin.

In the 1980s – long before poignant statues of gaunt, starving people were put in place by the banks of the River Liffey – Michael was struck by how there was no public acknowledgement at all of this terrible tragedy on the streets or in the parks of the Irish capital. 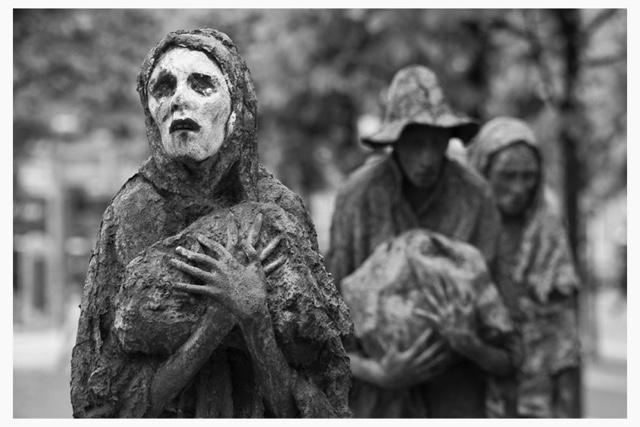 Blanch began a 15 year campaign to ensure that the people who died, survived, or emigrated would be remembered through a National Famine Commemoration Day.

Thanks to his efforts, legislation is set to pass through the Dáil (the Irish parliament) in the next few weeks to ensure that the terrible tragedy is remembered on the second Sunday in May each year.

Deputy Colm Brophy of Fine Gael, who brought the legislation before the parliament, said it was important that every school child in Ireland learns about the horror of the failure of the potato crop, which affected every town and village in Ireland.

Yet news that Ireland is to get a Famine Commemoration Day has been greeted with a huge online debate over whether or not Ireland really experienced a ‘Famine’ in the 1840s.

The Irish term for the worst time in Irish history, An Gorta Mor, actually means The Great Hunger. More and more people are now of the opinion that there never was a famine, but that the five years of starvation were the result of a deliberate policy of genocide by the British authorities who ruled Ireland at the time.

Historian Christine Kinealy, in a book called ‘A Death-Dealing Famine’, acknowledges that there has long been an argument that the deaths of a million Irish people were a triumph of doctrine over humanitarian considerations.

What is beyond doubt is that food was exported from Ireland to Britain during the worst years of the catastrophe.

Kinealy points out that official export figures are unreliable because Ireland was considered part of the British Empire in the 1840s, it was part of a ‘free-trade’ zone and there was little need to keep official data of food imports from one island to the other.

But, considering that a million died, shipping reports from the main British ports at the time are startling.

In 1847, the worst year of the Famine, almost 4,000 ships carried food from Ireland to the major ports of Liverpool, London, Bristol and Glasgow. Over half of them went to Liverpool, where many Irish people also ran out of money as they strove to make their way across the Atlantic.

Records show that ports in some of the worst-affected parts of Ireland, including Ballina, Bantry, Ballyshannon, Kilrush, Sligo, Limerick, and Westport on the Atlantic seaboard, where thousands upon thousands were dying of starvation, were also sending food to the so-called mainland.

Oats, corn, and potatoes left Ireland for the ‘mainland’ while there was an on-going debate over whether or not the ports should be closed raging in British politics.

Merchants had pressed the British Government to keep the ports open and allow free trade to continue without intervention, even though the city councils in Belfast, Cork, Derry, Dublin and Limerick pressed for the ports to be closed so that food could be kept on the island of Ireland.

Mindful of the death and despair all around them, the cries from the Irish cities were ignored.

Under Sir Robert Peel, Indian corn was imported to Ireland following the first appearance of the potato blight in 1845. The main purpose of importing £100,000 worth of corn from America was to stabilise food prices, rather than to feed the destitute Irish.

Peel’s Government fell in 1846 with the Whigs, under Lord John Russell, coming to power in London.

This new Government decided to discontinue the policy of corn importation from America, leaving food importation to “market forces” even though there was far less food than in the previous year.

Merchants and grain producers, a powerful interest group at the time, campaigned to make sure that only a limited number of food depots would open in the West of Ireland, even as thousands were dying.

The Lord Lieutenant of Ireland, John William Ponsonby, criticised the merchants for striving to keep prices up even in the midst of an appalling catastrophe.

“It is difficult to persuade a starving population that one class should be permitted to make 50 per cent profit by the sale of provisions whilst they are dying in want of these,” he reflected at the beginning of 1847.

Soup kitchens eventually replaced the public works programme which was introduced by the Whig Government, and grain imports to Ireland rose, but by then it was too late for the hundreds of thousands who died.

Some historians now agree that British Government policies deliberately led to the deaths of hundreds of thousands of Irish people, leading many people to proclaim that there never was a Great Famine.

It could be argued that it was a deliberate act of neglect, if not quite an act of genocide. 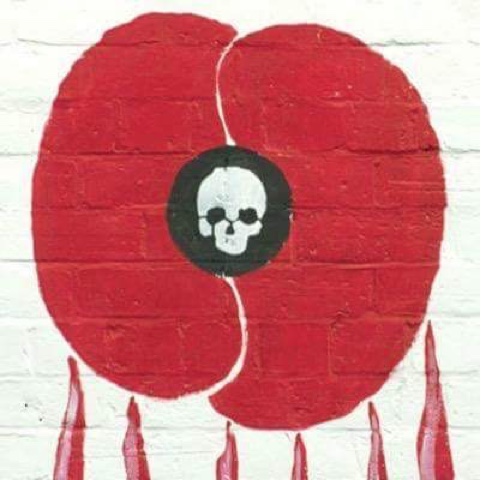 During the tense Brexit border negotiations before Christmas, many Irish people were shocked by how little ordinary British people knew about their own country’s history in Ireland.

They don’t teach much, or anything, about the Great Hunger in British schools.

Now, thanks to a Dublin taxi-driver, Irish children will remember the million who died and almost two million who emigrated on a designated day in May of each year.

Whether we call it a ‘famine’ or ‘genocide’ at this stage is perhaps not as important as the fact that the people of the island are finally going to have a special day to honour and remember those who died.

Ciaran Tierney is a journalist, blogger, and digital storyteller, based in Galway, Ireland. Find him on Facebook here