The rich people who flew all over the world so that poor people could die.

The 17-year old denied treatment at an urgent care centre, because he did not have health insurance in the richest country in the world.

The horse racing officials who thought it was fine for 250,000 people from all over Britain and Ireland to mix, drink and mingle at Cheltenham Racecourse, right at the outset of a pandemic.

The Taoiseach (or Prime Minster) who claimed workers were asking to be laid off because the Government was paying them so much in emergency welfare. Because, you know, poor people are lazy and don’t really like to get up in the morning.

The politicians, “celebrities”, and “royals” tested so quickly; while no test kits were available to doctors, nurses, and carers on the front line.

The Irish TV presenter who got his results back while a doctor missed seven shifts due to worry that she had contracted Covid-19.

The deliberate downgrading of a public health service which had been in crisis for decades, while handsome grants were provided for the building of private hospitals.

The landlord who reckoned it was a good time to rent out a shared room to two single people in Galway City, for €400 per month per person.

The Dublin landlord with at least three properties who ruled out a temporary rent freeze for tenants who had just lost their jobs.

The health service worker who was asked to leave her accommodation by another landlord . . . because of her job. 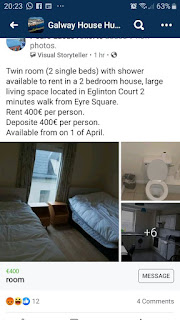 The rich state in a rich country which painted out social distancing markings for homeless people to sleep in boxes in an outdoor car park, while dozens of hotel rooms lay empty nearby.

The Irish hotels who put in elaborate security systems because they were closing up for three months, leaving empty rooms when there was never such demand.

The banks who decided to charge thousands of people “quarterly charges” or punish them for not having enough money in their accounts, two weeks after thousands had lost their jobs.

The Government officials who thought “social distancing” and “self-isolation” were possible for asylum-seekers sleeping in bunk-beds, seven to a room.


The local supermarket owner who more than trebled the cost of hand-sanitizers; because he was “only responding to demand”.

The football club which told its staff it could not afford to pay them €600 per week, while their “superstar” players continued to pocket €150,000.

So they put their ordinary workers, the ones who never appear on TV, on a Government scheme.

The “celebrity” tweeter who invented fake news about the deaths of four health care workers, because he wanted us to believe everything the Government did was wrong.

The minority of pubs who stayed open for a few “sneaky pints” because social distancing didn’t apply to their customers or their families.

The big country which tried to hijack life-saving equipment on its way to small countries, or which tried to bribe a private company in order to get exclusive access to a vaccine.

The Israeli who said there was “no way to spin” footage of thousands of Palestinians being massacred if they rushed to the border fence in urgent need of health care.

The Indian authorities who announced a three week lockdown at such short notice that, in the absence of public transport, thousands of jobless poor people had to walk hundreds of kilometres home.

The thousands of homeless people who found “social distancing” an impossibility as they were forced to queue for food.

The British and American politicians who insisted on keeping their schools and workplaces open, forcing millions to cram into crowded buses and subway trains. Long after they knew the disease would not spread if they just stayed at home.

The ‘wet markets’ in China where animals are treated appallingly and were supposed to be permanently shut down in 2003.

How stocks and shares still mattered to some people as the Intensive Care Units and morgues filled to capacity.

The US troops flying in and out of Shannon, buying leprechauns at the duty free shops, when commercial flights were being shut down.

The President who called the virus a “hoax” before his inaction and desire to put the economy over people cost thousands of lives.

The poor people who felt they had to work, even with the symptoms, because (unlike in Ireland) there was no safety net for those who had to isolate themselves at home.

How politicians who opposed a strike by nurses, seeking decent pay and conditions, asked us to stand and applaud them outside our doors. In Germany, they applaud their health service by funding it. 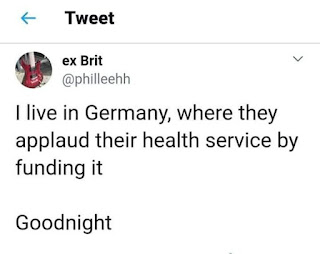 The absurdity of a rich country with no public health system, and how a global pandemic has shown us that health care for all is a necessity – not a luxury – when something like coronavirus rampages through a country and takes so many lives.

How empty the lives of shallow “celebrities” seem when we stop and pause and tune in to the real people living around us in our daily lives.

In Ireland, and indeed across the world, we have so much to be proud of in terms of how we have responded to the coronavirus emergency.

Will we remember how the smog lifted in Chinese cities and that people could hear the birds sing for the first time in years?

Will we remember how clean the air was or the beautiful blue skies?


Will we remember the Italians who sang to each other across empty squares or the Dubliners who played bingo on the balconies? Reminding us that community and solidarity are more important than the economy, stocks and shares.

Will we remember the hotels in the West of Ireland offering free meals to the elderly even as their businesses were about to shut down?

Will we remember the businesses who put up symbols of hope, such as the blue heart on the big wheel in Salthill, even as their businesses fell apart?

When all of this is over, will we remember the huge lessons to be learned?

Or will we just go back to the way we were?