Katie Hopkins cares deeply about the people of Oughterard. She said so in a Tweet, which she posted with a video from a protest in the Connemara town.

“Bless these lovely people in Oughterard,” she wrote. “Silently protesting against the imposition of African migrants into a converted hotel in their quiet Irish town. Will Ireland follow Germany? Do we never learn?”

Hopkins is British. She’s a far-right extremist who despises immigrants, whether they are asylum-seekers fleeing persecution or economic migrants in search of better lives. If she had been writing for the British tabloids in the 1950s or 1980s, I doubt she would have had too many good things to say about the Irish.

Hopkins has been re-tweeted by US President Donald Trump and, bizarrely, given a platform by Ryan Tubridy to express how much she despises foreigners on RTE’s ‘Late Late Show’.

I very much doubt she would have been able to locate Oughterard on a map of Ireland three weeks ago. But somebody here in Ireland was compelled to send her a video of a protest against plans to locate a Direct Provision centre in the Co Galway town.

Why would she suddenly be concerned about the 1,300 residents of a small town in the West of Ireland? Could it have anything to do with the fact that the kind of fascist rhetoric used by Hopkins in the UK and ‘alt-right’ groups in the USA is beginning to take a foothold here?

Why would it bother her if there are plans to locate up to 250 asylum-seekers in a Co Galway town?

When it comes to migrants, Hopkins has form. It is quite possible that her sudden concern for the people of Oughterard is motivated far more by a hatred of immigrants – and links to like-minded Irish groups – than any real concern for the welfare of the town’s residents.

“Rescue boats? I’d use gunships to stop migrants,” she wrote in her column in The Sun in 2015, before referring to migrants in Calais, France, as a “plague of feral humans” as they tried to board trucks to gain access to her beloved United Kingdom.

Not for her any concerns for nice Syrian Christians fleeing persecution as they make their way across the Mediterranean Sea in search of new lives in Britain or Ireland.

“Make no mistake, these migrants are like cockroaches. They might look a bit “Bob Geldof’s Ethiopia circa 1984”, but they are built to survive a nuclear bomb. They are survivors,” she also wrote four years ago.

Just the kind of person the people of Oughterard need on their side right now.


Rowan Croft, who tweets as Grand Torino, says he cares deeply about the people of Oughterard.

“We are not the land of milk and honey for economic migrant window shoppers who, skip through European countries till they find one with weak politicians and a generous welfare system to sponge off,” he tweeted recently, using the hashtag #Oughterard.

“We are full. Ireland and Irish first.”

His message echoes the ‘America First’ rhetoric of Donald Trump or the ‘Britain First’ language of far-right British fascists who have been emboldened by the Brexit vote across the water.

Croft describes himself as an “Irish patriot”, even though he once served in the British Army and swore an oath of loyalty to the Queen of England.

Apparently, Hermann Kelly of the Irish Freedom Party cares deeply about the people of Oughterard, too.

He must do, because he was invited onto ‘Drivetime’ on RTE Radio One this week to talk about the campaign to keep a Direct Provision centre out of the town.

To the best of my knowledge, Kelly has no strong connections to the Connemara town. His main claim to fame, so far, is that he has worked as Director of Communications for Nigel Farage’s group in the European Parliament.

But people like him have been stirring up legitimate concerns in Oughterard, where local people have a right to ask questions about plans to house up to 250 ayslum-seekers in a disused hotel in the town.

Gearoid Murphy also cares about the people of Oughterard. So much so he travelled up from Cork on a Wednesday night to attend the now infamous meeting in the community centre; where concerns were raised about the prospect of turning the Connemara Gateway Hotel into a Direct Provision centre. 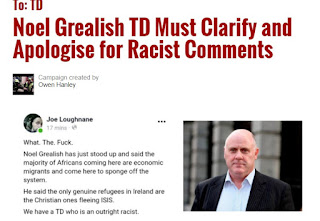 It was Murphy who filmed Deputy Noel Grealish, the Independent TD, claiming that African migrants were “sponging” off the system in Ireland.

Noel Grealish is concerned about the people of Oughterard. There is an election looming within the next year and he probably figures his comments have done him no harm.

He saw how presidential election candidate Peter Casey experienced a surge in support after making comments about Travellers last year. Two weeks have passed and there is no sign of an apology or retraction from the Galway West TD.

Presumably, he has never met the Nigerian woman I spoke to two years ago, who was captured and held captive by Boko Haram, who wanted to use her as a sex slave.

Trapped in a small room in a disused hotel with her daughter in Galway, she could not afford the price of a text message when she needed to postpone our interview.

There is no way she dreamed of "sponging off the system" in a disused Salthill hotel, struggling to get by on €38.80 per week, when she arrived in Ireland eight years ago.

She doesn’t fit Grealish's narrative of “good Christian Syrians” fleeing ISIS in order to make a new life, because he believes all Africans coming here are spongers.

The language Grealish came out with in Oughterard that night was exactly the kind of rhetoric being spread by the far-right in the United States in the lead-up to the election of Donald Trump in November 2017.

He has normalised the kind of language which allows us to look at Syrians or Brazilians as “good” immigrants while those who come here from Africa are “bad”.

On his own website, Grealish admits that seven members of his own family have been economic migrants. He currently has three siblings living in Boston and one each in Copenhagen, Chicago and Nebraska.

“I can guarantee you it is not the persecuted Christians and Syrians who are coming here,” Deputy Noel Grealish told the Oughterard meeting. “It is the economic refugees that is coming in from Africa that are trying to get across the Mediterranean and ended up in Europe, and ended up in Ireland, and ended up in Oughterard.”

One wonders what kind of persecution his own family members faced in Galway before they left for new lives overseas.

Or is it ok for some people to become economic migrants, but not others?

I have spoken to three people, none of whom know each other, who attended that meeting in Oughterard. Although quite a few locals were present in the crowd of about 800, they saw people spread throughout the hall they had never seen before in their lives.

All of them said that they were shocked and intimidated by the atmosphere in the room, the stoking of fears, the anti-immigrant rhetoric, and the abuse directed at any speakers who went against the prevailing narrative.

People in Oughterard have genuine concerns and they have every right to raise them at a public meeting.

They have a right to know why they have no Garda Station at night, why it’s so hard to get housing, why there is so little information coming from the Government, or what leisure facilities would be put in place to cater for so many asylum-seekers forced to live on €38.80 per week for months on end.

They have a right to ask why it feels as though their town is being left behind while the major cities are booming.

They have a right to ask whether Direct Provision is a humane system and whether it’s right to force up to 250 people to live for years in a disused hotel in a town most of them have never heard of.

What they don’t need are far-right extremists, with links to British, American, or Italian fascists, coming along in order to hijack their protest and exploit their concerns.


• Two protest marches against Direct Provision take place in Co Galway on Saturday. Locals have organised a silent march in Oughterard at 11.30am, while the Galway Anti-Racism Network (GARN) has scheduled a protest for 4pm in the city. The time of the city protest has been changed to accommodate people from Oughterard.


--  * Ciaran Tierney won the Irish Current Affairs and Politics Blog of the Year award in October 2018. Find him on Facebook  or Twitter here. Visit his website here - CiaranTierney.com. A former newspaper journalist, he is seeking new opportunities in a digital world.