Bring on the clown

On Saturday, in cities all across the world, people are set to gather to protest against the election of US President Donald Trump.

At first, when I heard about the Galway protest, I decided I would not bother to attend.

I felt it was time to bite the bullet and accept a democratic vote as, after all, more than 62 million Americans voted for the New York businessman and reality TV star.

Never mind the fact that Hillary Clinton polled over 64 million votes – I wasn’t a great fan of hers either – Trump was the legitimate winner of the US election.

I felt the Galway march would be organised and attended by the “protest against everything” brigade, the kind of people who condemned An Taoiseach (the Irish Prime Minster) Enda Kenny for congratulating Trump on his election victory in November.

Some of these people are never happy.

Whether they like it or not, they conveniently forget that the tiny Irish economy is over-reliant on American jobs in a globalized world.

They forget or ignore that sometimes in politics it’s important to play the game.

Kenny may have called Trump a racist during the election campaign, but it would be political suicide for an Irish leader to antagonize an incoming US President before he has even taken up office.

The US has always been close to the hearts of Irish people. It was an escape valve during tough times, when the ‘coffin ships’ set sail from Cork or Galway to allow people on one-way trips to flee from persecution and famine.

There are 40 million Irish-Americans and few countries as small as ours have such a big influence at the White House, where the Taoiseach gets to socialise with the President every year on our national holiday.

So I decided I would find something better to do this Saturday afternoon.

And then I began to read the comments on-line in response to the Galway protest, in which people felt free to vent their hatred towards immigrants, Muslims, or liberals.

They defended, and tried to justify, a presidential candidate who mocked a disabled reporter in front of millions of TV viewers. And claimed we had not seen the evidence we had witnessed with our own eyes.

Some of them genuinely believe that this billionaire businessman, whose father famously gave him a “small loan” of a million dollars to give him a start in life, is the answer to America’s problems.

This is a man who tweets with venom when he dislikes a piece of brilliant Alec Baldwin satire on ‘Saturday Night Live’.

Or who takes the time to send out a vitriolic reply to Hollywood actress Meryl Streep after she dares to criticise his views, at a time when he should be focused on putting his new Government together.

If Trump can take such offence when actors express concern about what he’s about to do to their country, how’s he going to behave in the Oval Office if he feels slighted by the Russians or the Chinese?

To judge by so much bile and hatred on-line in recent weeks, the election of this man seems to have emboldened people who think it’s ok to spread hatred of immigrants, or Muslims, or Mexicans on-line.

It’s scary that 62 million people felt so angry or disillusioned that they voted for a man who boasted about "grabbing" women "by the pussy". Because he was rich and famous, he could act as he pleased.

It’s even scarier that Trump is a buffoon and a liar when it comes to climate change.

He has surrounded himself with people who have a vested interest in fossil fuel industries at a time when the very future of our planet is under threat.

Senior members of his Government have already admitted that short-term gain is more important than the state of our planet over the next 50 years.

The ice cap is melting, the oceans are rising, but Trump wants to reopen the mines and to "make America great" again by building gas-guzzling cars.

We can see it everywhere … global warming is no longer an abstract concept. We can see it in rising temperatures or freak storms, or the terrible air quality in big Asian cities which threatens the health of millions of people.

His treatment of a CNN reporter at a press conference last week brought to mind the way tyrants like Hitler or Stalin went out of their way to suppress and silence a free press in the 20th century.

But who cares what CNN say when you can get updates from Breitbart or Fox News?

This week, I've had people argue with me that Trump is not a racist, a sexist, or Islamophobic. They send me to obscure extreme right wing websites in a bid to discount what I've actually seen with my own eyes.

They'd rather keep the Mexicans out than look at the uneqaul power structures in this desperately unfair world. They'd rather build walls than bridges, when it was the immigrant experience which made America "great" in the first place.

It’s astounding that a property speculator with racist views is now seen as the salvation for so many people who are angry at the state of the world.

The people who pour scorn and venom at "illegal" immigrants see no irony in the fact that their own ancestors, many of them impoverished, set sail for the Americas in search of new and better lives.

Few of the people I have heard ranting about the Islamification of Europe and America seem to have spent much time in the Muslim world, where most people just want to get on with living happy and peaceful lives.

It’s simply absurd to condemn all Muslims – there are 1.6 billon of them across the world. It’s frightening, rather than absurd, that people still voted for Trump after he threatened to tag Muslims in America with special IDs just as Hitler targeted the Jews in 1930s Germany. 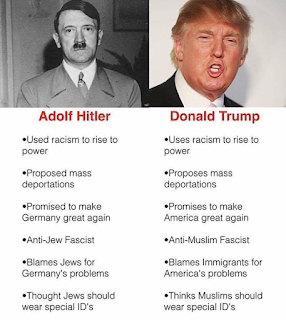 By voting for Trump, people chose ignorance over understanding and hatred over love. And I don’t want to live in that kind of world.

Like millions of others, I really hope that Trump will be a success, that he will shock the “lefty liberals”, and that he won’t destroy America and the world.

But he has said too much before and since the November election for people to face the future with anything other than concern or trepidation.

Which is why I feel it’s important to attend the protest against his inauguration on Saturday.
Not because we don’t accept the result of the election, but because Trump’s message of fear, loathing, and division is capable of destroying the entire world. 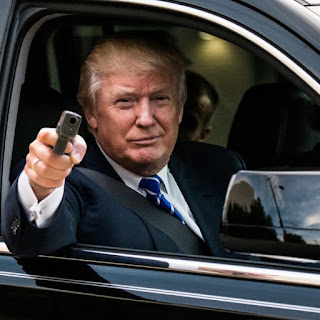