A bluffer's guide to an eventful 2017

Too many faced job insecurities or even job losses, relationship breakdowns, and financial worries about the future. Many felt they were only a pay cheque away from homelessness, with rents increasing and the prospect of buying a home in Ireland becoming ever more remote for an entire generation.

The crisis in our health service left far too many vulnerable people lying on trollies and all across the globe thousands of people lost their lives in appalling wars.

We saw many of our musical heroes pass away, while the Brexit and Trump votes seemed to suggest that hatred and fear had overcome love and understanding on both sides of the Atlantic.

People began to wake up to the appalling reality of climate change, only to realize that a man who completely denies the reality of pending environmental catastrophe had become the most powerful politician on the planet late in the year.

But the start of January is a time for renewal and change, and perhaps looking forward to a brighter future.

When I used to work in the newspaper business, I often wrote my predictions for the New Year.

So, for what it’s worth, here’s my tongue-in-cheek assessment of what 2017 has in store.

JANUARY
The Irish Times publishes a piece called ‘Why fascism is trendy again’ on the eve of the inauguration of US President Donald Trump in Washington DC. The event itself proves to be something of a damp squid, as Mexicans, Muslims, women, gays, gun-owners and liberals are banned from the ceremony. The only two foreign leaders to attend are from Holland and Northern Ireland, after Trump insists it’s an “orange only” event.


FEBRUARY
With an unprecedented number of patients on trolleys in Ireland’s public hospitals, An Taoiseach Enda Kenny is accused of gross hypocrisy when he takes a private jet to the United States for emergency heart surgery.

However, the emergency is quickly forgotten as a team of surgeons at a highly rated private clinic in New York fail to find his vital organ. Following his release from hospital, an emotional Mr Kenny calls on President Trump to give an amnesty to the “undocumented” Irish in the US who were unable to go home for Christmas.

MARCH
After returning to Ireland, Mr Kenny calls for an immediate clampdown on “illegal” immigration to Ireland. “This might be the best little country in the world to do business in, but our small island hasn’t got room for all these niggers,” he tells a Fine Gael function in his native Castlebar. After a reporter from the Mayo Gazette secretly records his speech, he accuses the media of lacking a sense of humour and promises to sell the Gazette to his close friend, Denis O’Brien.

Trump, meanwhile, pledges $100 billion in military aid to Israel, on his first overseas trip since taking office. “It’s simply inhumane to expect Israelis to live on just 78% of Palestinian land,” he says. “I’m very strong on Israel. I’m so strong on Israel, in fact, that I’m gonna kick the UN out of New York for daring to question their policies. I’m gonna make Israel great again.”

APRIL
Niamh Horan of the Sunday Independent courts controversy by organising a five page “Fascism is Fashionable” feature, with photo shoots of columnists Ian O’Doherty and Brendan O’Connor dressed up in Ku Klux Klan costumes. Controversy rages over the lack of security at Dublin Airport when UK columnist Katie Hopkins disguises herself as a cockroach when flying in for the feature.

Amazingly, security and customs personnel failed to notice any difference and waved Ms Hopkins through without even looking at her passport.


MAY
Shannon Airport is in the news this month when management celebrate the arrival of the 5 millionth US soldier at the ‘neutral’ facility. A proposed party to welcome the soldier, on his way home from Iraq, has to be cancelled when white phosphorous is released from his plane, causing the deaths of 48 Ryanair passengers on their way to London.

Thankfully, no US soldiers were injured in the accident. And Michael O’Leary was presented with an Irish business innovation award when he managed to have his plane back in the air within four hours of the incident.

O’Brien buys up every remaining regional newspaper in Ireland, while Murdoch purchases all of the country’s “independent” radio stations. New Minister for Communications Michael Lowry expresses complete satisfaction with both deals.

JULY
The five million Native Americans in the US are baffled when President Trump warns them that they will be deported “along with all the Mexicans and Muslims”. A new “Orange Lives Matter” movement is born in the USA to counteract vicious lies about police brutality and Guantanamo Bay in Cuba begins to fill up with environmental scientists after the phrase “climate change” is banned by the US Congress.

AUGUST
Tax exile Bono becomes Freeman of the City after spending three nights “sleeping out” on Grafton Street in Dublin to raise awareness of homelessness. However, he calls the Gardai when a real live homeless person turns up at his occasional Dalkey home. Later in the month, he’s presented with an award for services to humanity by UN Secretary General Ivanka Trump.

“Every day, the poor people of Africa must thank their lucky stars that they have a brilliant, billionaire Irish singer to speak out on their behalf,” she said at the award ceremony at Trump Tower Two, the new name for the UN HQ in New York. Back home, Ireland becomes the first country in Europe to successfully sue the EU in order to make sure that it did not get money owed to it.

Taoiseach Kenny says he’s delighted he won’t have to take €17 billion in taxes owed by Apple Inc, as it would do “enormous damage” to Ireland’s reputation as a great little country to do business in. 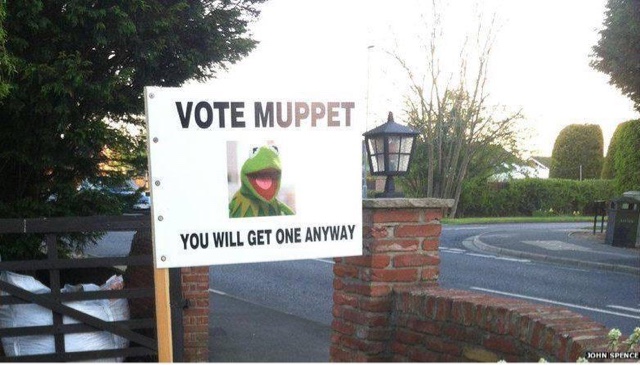 SEPTEMBER
Fears that RTE would have to go into liquidation due to financial difficulties are allayed when TV presenter Ryan Tubridy agrees to take a five per cent pay cut. Mayo win the All-Ireland football final (sorry …. That bit is made up!), no, actually, Dublin and Kilkenny win the football and hurling respectively. Hurling fans all over the country come together to hire Dublin drugs gang the Keenihans to ‘take out’ Kilkenny boss Brian Cody.

RTE are faced by a flood of complaints when crime journalist Paul Williams appears on the ‘Late Late Show’ for the 50th time, but lets his fans down badly by failing to utter the word “scumbag” once during his 45 minute appearance with Ryan Tubridy.

OCTOBER
Gardai issue an apology after a banker is arrested for drunk driving. An Taoiseach Enda Kenny summons the Garda Commissioner to his office to remind her that no banker is to be arrested for any offence, ever. The Government announces that Irish Water is to be revived and advertises for a new CEO, to be paid €400,000 per year. A demonstration against Irish Water attracts 30,000 people to the streets of the capital, but organisers claim that 100,000 took part and Gardai deny that it even happened.


NOVEMBER
The Prime Minister of Israel, Benjamin Netyanahu, is awarded the highly prestigious Tipperary Peace Prize. Human rights organisations condemn the prize, pointing out that Israeli soldiers have killed 1,500 people so far in 2017. A spokesman for the committee, Alan Kelly, says that this is a big decrease on the 2016 figure.

“And, anyway, sure, he’ll bring a crowd and he’ll give us a bit of publicity,” say Kelly.

Russian jets bomb 85 civilians to death in Syria on the same day as US fighters murder 85 civilians in Iraq. RT provide excellent coverage of the Iraqi deaths, but say those in Syria never happened. Fox News, now allowed 24/7 access to the White House for a new series called ‘The Don Knows Best’, accuse RT of “fake news” and call for the Russian TV channel to be banned from America.

“Unlike all the others, Fox gets it,” says Trump.

DECEMBER
A visit by US President Donald Trump to China turns controversial when the Chinese hosts fail to place a giant mirror in his Shanghai hotel bedroom. Enraged, Trump returns to Washington DC, where he presses the red button to blow the Chinese … and the rest of us … to Armageddon.

From the archives: An Uncomfortable Truth for Culture Night